Seasons Greetings from the Skies Above

The hydrologic cycle: evaporation, precipitation, soil absorption, surface runoff, and transpiration. This process plays a significant role in determining an area’s wet and dry seasons. A wet season is defined as a period when there is 10-40 inches of rainfall per month where as a dry season will get less than 4 inches of rainfall per month. The flora and fauna of the Amazon rainforest have adapted to such conditions and thus depend on their occurrence to survive. Rainfall’s intensity influences the growth of trees and activity of insects, as well as their interactions with one another. 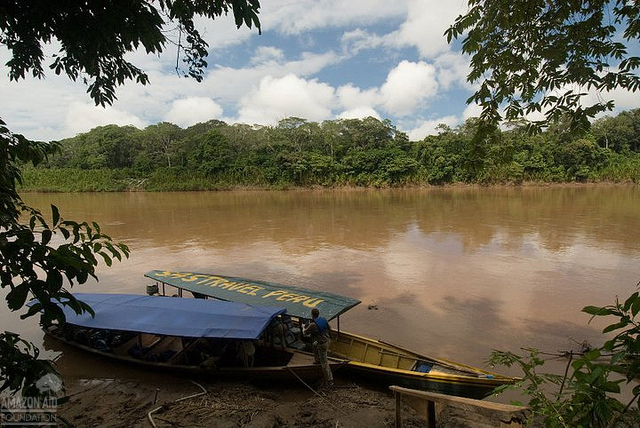 During the wet season, the Amazon River will rise and flood the trees along the coastline. Photo by Raechel Running

Trees living in flooded areas tend to be shorter and sparser than those living where there is proper drainage. As the trees are submerged underwater, fish begin to eat the insects that inhabit the trees. The dry season is more favorable to insects. Since downpours are less frequent during the dry season, insect activity is heavier and they are able to pollinate more trees. The subsequent wet season provides the water necessary for the pollinated seedlings to mature, thus increasing tree coverage and carbon sequestration.

The wet season sees an increase in insect grazing since the leaves on new trees are still young and vulnerable to attack. This makes both the wet and dry seasons crucial in maintaining the rainforest’s systems. If there is too much rain, then fewer seedlings will be pollinated, decreasing overall tree coverage and increasing food competition among insect species. However, not enough rain can also decrease the number of trees because seedlings wouldn’t get the water necessary to grow and continually feasting insects might kill the trees.

Climate change favors the latter scenario, as temperatures rise and moisture evaporates from the soil. Human activities are impacting the climate, which in turn alters the hydrologic cycle that gives the Amazon its seasons and enables regular system dynamics.