River of Gold to be Honored at Third Annual Pongo Awards

The Orang Utan Republik Foundation (OURF) will honor environmental achievement from film, television, science and technology at the 3rd Annual Pongo Environmental Awards to be held on Saturday, September 24, 2016 at a private residence in West Pasadena, California.

Hosted by actor/activist Ed Asner, the evening raises funds for OURF to save wild critically endangered orangutans from extinction and is dedicated to honoring individuals, organizations and projects that have contributed to the improved understanding and appreciation of orangutans, endangered species, rainforest habitat, and for improving conditions for orangutans and other animals. 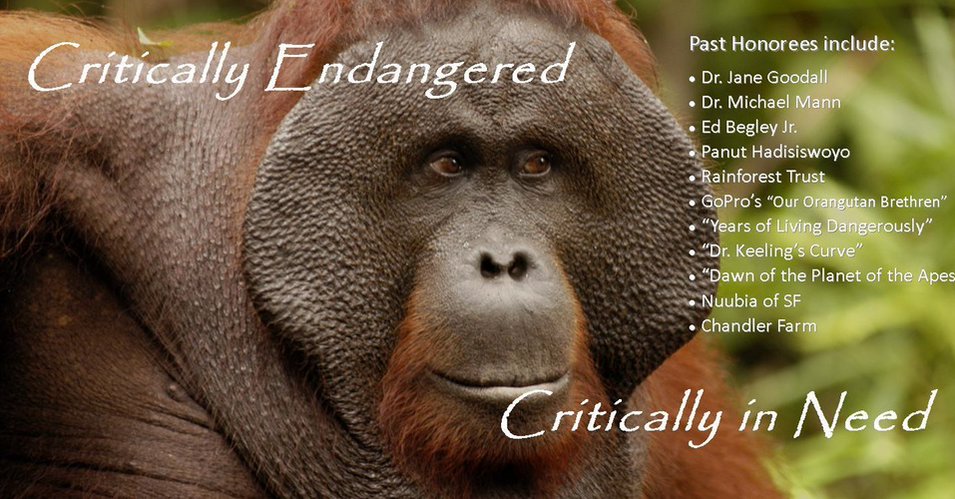 The theme of the awards and benefit program this year is: “Critically Endangered…Critically in Need”, which is a timely reminder that ALL orangutans are now classified as CRITICALLY ENDANGERED by the International Union for the Conservation of Nature. In their recently updated REDBOOK, the Bornean orangutan species’ conservation status was changed from ENDANGERED to CRITICALLY ENDANGERED joining the critically endangered Sumatran orangutan species. Such a species faces “a very high risk of extinction in the wild.”

The Orang Utan Republik is celebrating its 12th year of educating people about the plight of the orangutan. “This new change in conservation status should remind us that time is not on our side and that a critical need exists to address both species’ plight”, says OURF President and co-founder Dr. Gary Shapiro. “The Annual Awards and Benefit program is one way to address the need by raising funds that help keep our successful programs in the field and to pay tribute to those who make a significant positive impact in the environment.”

Special honors and recipients of the 3rd Annual Pongo Environmental Awards this year are Dr. Ian Singleton, researcher and conservationist with the Sumatran Orangutan Conservation Programme; Rainforest Connection a project developed by physicist Topher White to repurpose old cell phones and other technology to locate illicit loggers; “Racing Extinction”, a film by Louie Psihoyos that documents the demise of species around the globe and a movement to educate the public, and “River of Gold”, a documentary by Sarah duPont that investigates illicit and unregulated gold mining in Peruvian Amazonia and the negative environmental and societal impacts it causes.

Previous Pongo Award recipients have included Dr. Jane Goodall; James Cameron, David Gelber and Joel Bach for the pioneering Showtime series “Years of Living Dangerously” promoting climate change awareness; Professor Michael Mann, one of the most important climate advocates of our time; the producers of “The Dawn of the Planet of the Apes” for the film’s dramatic portrayal of an evolving population of great apes using CGI, actor Mike Farrell and playwright George Shea for “Dr. Keeling’s Curve,” the KCET television special about Dr. David Keeling, the scientist known worldwide for his work documenting global warming, and GoPro Creative Director Bradford Schmidt for his film, “Our Orangutan Brethren,” among others.

OURF continues to move forward to advance its conservation education mission. OURF recently crossed the 100th scholarship threshold when it awarded 18 new scholarships in June 2016 to students in North Sumatra, Aceh and West Borneo. OURF now serves as a chapter of The Orangutan Project in the US.

Orangutans are only found in the wild on the islands of Borneo and Sumatra in the countries of Indonesia and Malaysia (N. Borneo). Fewer than 14,300 remain on Sumatra. Their population continues to decline due to the conversion of forest to agriculture, the illicit pet trade, being killed as pests or hunted, as well as habitat degradation from natural and human caused activities (fires, mining, logging, palm oil).

OURF is a 501(c)(3) publically supported charity with a mission to save wild orangutans through education initiatives and innovative collaborative projects. OURF partners with Indonesian organizations and communities to promote outreach education and sustainable solutions to long-term conservation of the orangutan and its rainforest habitat. Culturally sensitive and effective education programs to foster community-based conservation actions are developed and implemented to save the forest habitat and the species. More information about OURF can be found at http://www.orangutanrepublik.org

For tickets, which will include the address of the fundraiser venue, visit https://OURF2016AnnualEvent.eventbrite.com. Contact Dr. Gary Shapiro at OURF at info(at)orangutanrepublik(dot)org for further information.