The Amazon jungle dog, Atelocynus microtis, is one of the forest’s most elusive animals. The short-eared dog is timid, about the size of a fox, and has a dark coloring that helps it hide from predators in the underbrush of the forest. They are so difficult to spot that it is said you are more likely to see a jaguar while visiting the Amazon than to see a jungle dog. 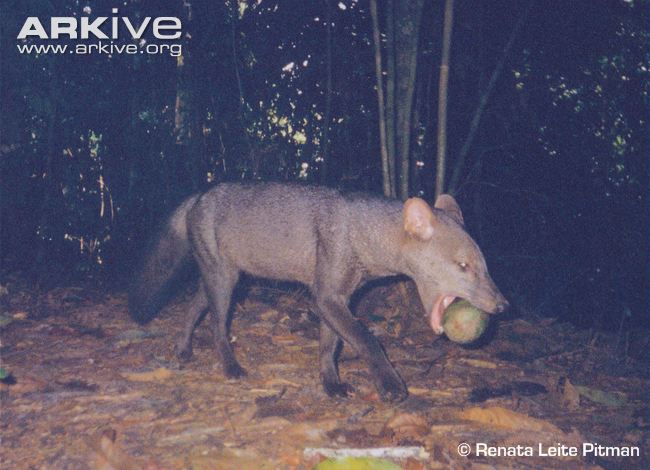 Renata Leite Pitman is a veterinarian and ecologist and is one of the few who has experience studying these animals. She has been studying them for 14 years and has only been able to capture and put tracking collars on five animals.

On May 25, 2014, a rare sighting of the animal was caught on video at the Tambopata Research Center in Madre de Dios, Peru. The dog was brought about by an animal corpse that was near where the camera was set up. It didn’t stay for long though, as Leite Pitman suggests they are wary of the blinking lights cameras have and the human smells that linger on them.

Their major threats include habitat loss, prey depletion, and disease. These dogs favor the undisturbed rainforest in the lowlands of the Amazon, and increasing deforestation is depleting these areas as well as the habitats of their prey. Domestic dogs with diseases such as parvovirus also pose a threat to the jungle dogs.

Due to their rare sightings and scant data (they were listed as “Data Deficient” until 2004 on the ICUN Red List and as “Insufficiently Known” before that), not a lot is known about their behavior, population, or distribution. However, researchers such as Leite Pitman suspect their numbers are declining due to increasing threats. The Amazon has twice as many mammal species as the United States, and the short-eared jungle dog is just one of the many who need protection from the human impact the forest is facing.