The Amazon Could Stop Breathing 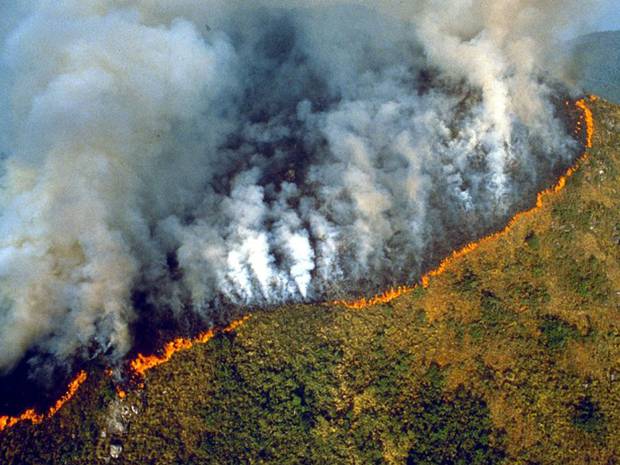 Drying out of the rainforest threatens to ignite the tree-filled habitat – with its rich biodiversity – and convert it almost overnight into barren desert. Photo from The Independent

Large droughts such as these are becoming more common in the Amazon, but the only consequence is not just carbon dioxide discharge. Fires in the Amazon are increasing due to droughts, climate change, and human interference. Scientists tested the intensity of a dry climate on the rainforest compared to normal rainfall conditions. Three fifty acre plots of rainforest underwent satellite observation for an eight year period during which two plots experienced controlled fires and the third was untouched. Scientists concluded that periods of drought led to more severe forest fires than would occur during times of typical rainfall.

Human interference through agriculture has created forest fragmentation, disconnecting the forest and leaving its edges more vulnerable to dry conditions and thus, catching fire. As the rainforest continues to ignite, the forest’s overhead canopy collapses and makes it easier for more flammable vegetation to infiltrate and take root.

The results of this experiment leads scientists to believe that increasing global temperatures will raise forest fire frequency in the Amazon, an outcome that will ultimately destroy the Amazon’s natural forest structure.