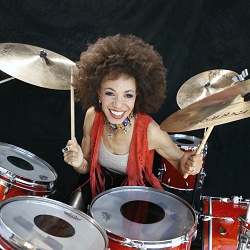 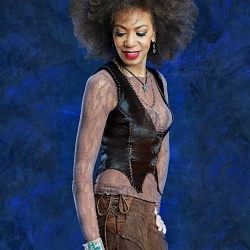 “I implore each and everyone, to make conscious choices to help support and SAVE our Earth’s lungs – the Amazon!’ This beautiful life support system is vital and a key element in our very survival and quality of life. Mother Earth is calling you, please answer with love.”

Cindy Blackman Santana is a virtuoso drummer whose artistry spans the realms of jazz and rock. As a bandleader and as a musician, Cindy is a sound innovator with a passion for pushing creative boundaries and exploring movement and change. She is as known for the nuances and colors she brings to her beats and fills as she is for the sheer power of her soulful playing.

From the beginning of her career as a busking street performer in New York City in the ’80s through the present day, Cindy has been touring the globe and making albums with artists including Pharoah Sanders, Cassandra Wilson, Bill Laswell, Joss Stone, Joe Henderson, Buckethead, Don Pullen, Hugh Masakela, and Angela Bofill. She writes, records, and performs with her own bands, Cindy Blackman Santana Group and Another Lifetime, which released its critically-acclaimed self-titled debut in 2010.

From 1992 to 2007 and again in 2014 and 2015 she was the drummer in Lenny Kravitz’s band, performing through multiple world tours and hit albums. In 2011, she joined forces with Vernon Reid, Jack Bruce, and John Medeski to form the celebrated Spectrum Road, which released an album and tour dedicated to the music of Tony Williams. In 2016, Cindy joined Santana full-time and has been mesmerizing audiences around the globe ever since. In 2017, she and Carlos teamed up with the Isley Brothers to release “Power of Peace” (SONY) and followed it up with the two most recent Santana releases: the EP In Search of Mona Lisa (2019) and full-length Africa Speaks (2019).

In September 2020, she delivered a new solo album Give the Drummer Some, with songs that span the realm of jazz, rock, and funk and featuring Cindy’s incredible versatility both behind the kit and in front of the microphone.