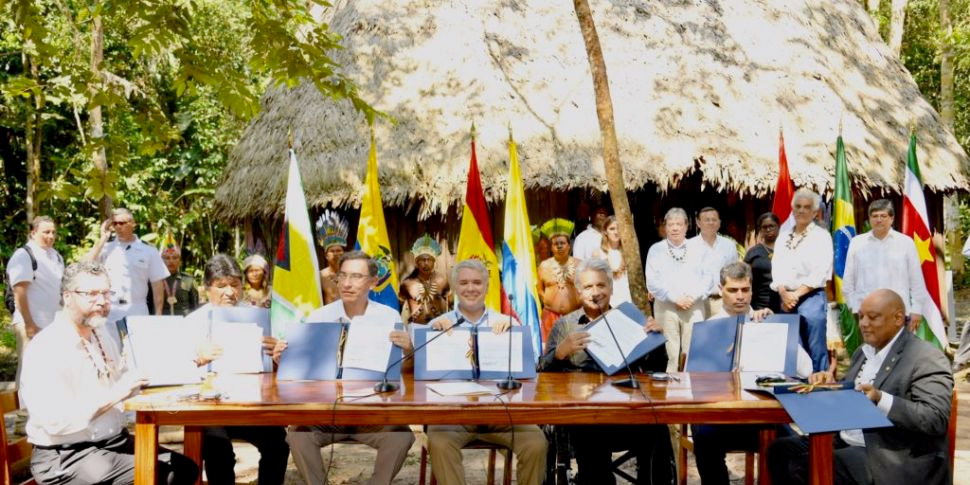 On September 6, 2019, representatives from seven Amazon countries signed a pact intended to protect the rainforest by expanding regional cooperation. Indigenous leaders also attended the gathering, which took place in a village of the Tikuna tribe in the Amazonian city of Leticia, Colombia.

The diverse attendance of the summit is a testament to the complexity of the Amazon itself. The Amazon Basin spans about 40% of South America, covers eight different countries and harbors one million indigenous peoples from as many as 500 tribes. As if this political and cultural diversity were not enough, the Amazon is home to over 30% of the world’s species.

The agreement, known as the “Leticia Pact,” is an effort by Amazon countries to address the recent wildfires that have wreaked havoc on the rainforest and provoked international outcry.

The fires that have engulfed swathes of rainforest in Brazil and Bolivia are the latest in a steady increase of deforestation. While one decade ago Brazil was moving towards a zero-deforestation policy, forest loss has been increasing since 2015. 2019 is expected to reach a new peak, with July and August as the two worst months on record.

With the current rate of global warming, experts estimate that over half of the Amazon will be converted into a savanna if more than 20-25% of forest cover is lost. To date, about 19.3% has been removed, putting the rainforest on the tipping point.

The Amazon generates at least half of its own rainfall, releasing about 20 billion tons of moisture into the atmosphere a day. As fires carve out more undergrowth, the forest dries out and rainfall decreases. Studies show that this loss could cause draught in agricultural breadbaskets halfway around the world, like the American Midwest.

What’s more, the Amazon removes 1-2 billion tons of carbon dioxide from the atmosphere per year, equal to about 5% of all human emissions. If deforestation and fires continue, within 20-30 years the Amazon could become a greater source than sink of carbon.

The only way Amazon countries can prevent deforestation and its effects from getting out of control is to work together.

What does the Leticia Pact Say?

Regional Coordination: the most emphasized element of the pact is coordination. The pact calls for the exchange of monitoring data on deforestation and the creation of the “Amazon Network for Natural Disaster Cooperation” to improve emergency response.

Green Innovation: another key point of the agreement is to expand afforestation initiatives, exchange green technologies and promote alternatives to fires.

At least 500,000 square kilometers of Amazon rainforest are either abandoned or degraded. This land can be revived through restoration. Experts also say that livestock farming productivity can be greatly increased to prevent more forest clearance.

Participation of Indigenous People and Women: Giving native communities a lead role in land stewardship is not just about protecting their rights. Research shows that indigenous-managed lands are better at preserving biodiversity than protected parks and wildlife reserves.

The pact also emphasizes the importance of empowering women in environmental issues, which has been shown to improve conservation and resource management.

While the Leticia Pact is a good start to building regional coordination, critics have pointed out that it is lacking in scientific detail and enforcement mechanisms.

Brazilian President Bolsonaro, whose rollback in environmental enforcement has been cited as a primary cause of the fires, stated that the pact served mostly to affirm national sovereignty (he did not attend the meeting in person). Venezuela, where significant illicit rainforest mining takes place, was not invited to the event because participants do not formally recognize its government.

In the final section of the pact, signees declare their commitment to an action plan that would implement the agreement’s key ideas. The effectiveness of the Leticia Pact depends on whether Amazon countries will follow through with this commitment.