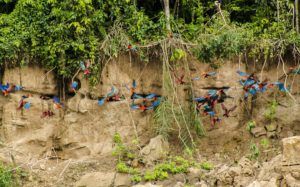 Macaws gather at a clay lick (colpa) in the Peruvian Amazon.

The colorful macaw is the largest bird in the parrot family, at a little over three feet long on average. These social birds often travel in pairs or groups of parents and a few young, but they can form flocks of thousands to avoid predators. Larger birds of prey, snakes, and monkeys are some of the macaw’s main predators. Macaws themselves are formidably strong and intelligent, though they mostly stick to fruit and a few insects for food. Their huge beaks can crush the hardest nuts and seeds, and their tongue has a bone inside which helps them eat fruits and nuts. Macaws can also be seen feeding at clay deposits along the banks of rivers. One theory behind this behavior is that the seeds and nuts they consume have a high tannin and alkaloid content, which can be toxic at high doses. The chemicals in the clay bind to these toxins and allow them to be excreted.

Macaws are diurnal, so they don’t fly at night, but they prefer the cool temperatures of the morning for travel and rest during the early afternoon when the sun is high. They travel over large areas throughout the day, mostly in the lowland rainforest. There are 17 species of macaws, which can be found throughout Central and South America. In addition to travelling long distances daily to feed, macaws make even longer journeys between seasons as the fruit availability varies among regions and habitat types. This means that as forests are cleared through burning and for farms, it can be harder for them to find prime habitat. A few species of macaw are endangered for this reason, and the huge amount of projected habitat loss over the next few decades poses a threat to other species whose populations are currently healthy.

Most of the 17 species of macaws are endangered or extinct due to deforestation and illicit capture for pets.

Macaw trade to N. America began 1000s of years ago when birds were traded to the Pueblo people, who used their feathers for ceremonial objects. 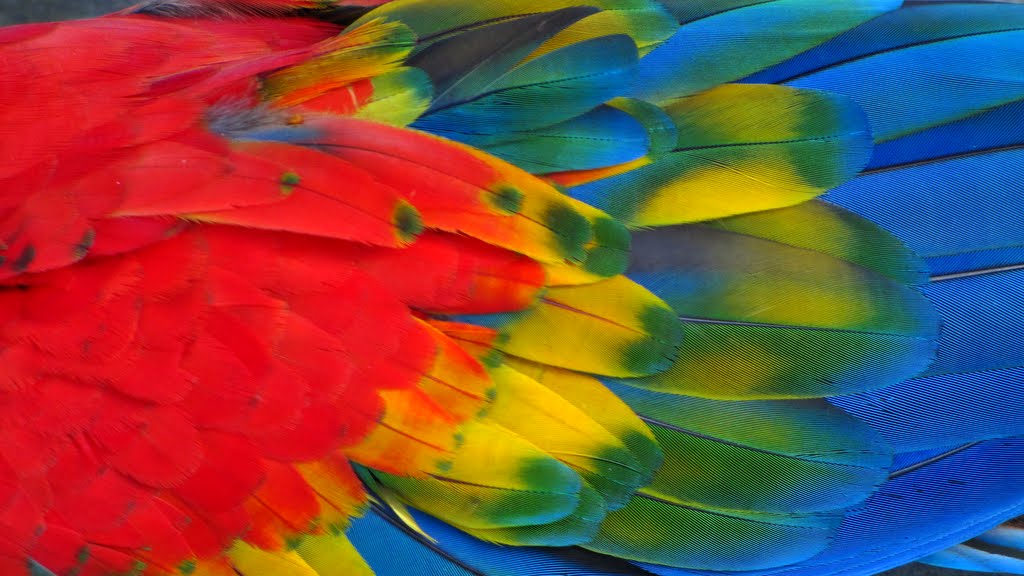 Humans are arguably the most significant predator of the macaw. Hunting and poaching of macaws is common. One of the main threats for macaws, though, is capture of juveniles to be sold as pets. Capture and trade of macaws has a long history, spanning thousands of years. Macaws have symbolic significance to many of the Native American tribes of the southwestern United States. To the Pueblo people, for example, they symbolize fertility, and their feathers are used ceremonially. While there is still a demand from Native American populations in the southwest, the pet trade is the reason most macaws are traded these days. Many macaws that are found in pet stores have been captured from the wild and sold illicitly. This practice causes harm to populations and perpetuates their status as a commodity among the people who purchase them from stores.