The jaguar (Panthera onca) is one of the largest and fiercest cats in the Americas. With a tan or orange coat and black spots, it looks very similar to a leopard, but has a more muscular build. Its range once extended from the U.S.-Mexico border to the southern tip of South America, but is now relegated to remote locations throughout Central and South America, particularly in the Amazon. The jaguar was a prominent figure in ancient Native American culture and artwork, and continues to be a charismatic species often featured in rainforest conservation campaigns.

Jaguar habitat includes rainforests, deciduous forests, swamps, mountain scrub habitats and pampas grasslands [1]. Though at the northern extent of the species range near the United States, jaguars have been sighted in the desert. Where these felines reside generally depends on access to water sources and prey availability. 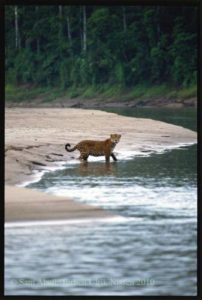 A jaguar wades into the river. Photo by Sam Abell.

While jaguars spend most of their time on the ground, they are avid tree climbers and good swimmers. As carnivores, they eat a variety of animals, including larger terrestrial animals such as peccaries, capybara, deer, tapirs, but also eat smaller aquatic animals such as turtles, fish or even caimans [2]. Jaguars are solitary and generally hunt alone, killing with their powerful jaws often in a single skull-crushing bite. Individuals are quite territorial and defend home ranges typically 10-40 km2 in area [3], but in some cases up to 1,000 km2 in area [4]!

According to the IUCN, the jaguar conservation status is ‘near threatened’ because long-term survival of the species depends on persistence of large, undisturbed tracts of habitat, much of which is found in the Amazon [4]. Jaguars are directly killed by poachers for their body parts and by ranchers in defense of their livestock. Hunting for consumption as food or medicine is a serious problem threatening mammals worldwide, but is usually driven by a desperate need for income and is supported by both local luxury appetites and global demand for animal parts, especially in Asia [5].

Far subtler but also significant threats include habitat fragmentation and human encroachment [6]. Decreased habitat accessibility for jaguars could mean decreased prey availability and increased levels of human encroachment. As development expands into jaguar habitat in the Amazon, conflict between jaguars and humans will only increase. Because jaguars have larger body sizes, smaller litter sizes and are relatively slow to reach reproductive maturity, they are especially vulnerable to declining population sizes.

Jaguars indirectly impact Amazonian ecosystems through their diet – they are top-predators, and thereby influence vegetation patterns through their consumption of herbivores [7]. Conservation efforts to protect jaguars keep herbivore populations in check, but also extend protection to other species. Jaguars are considered ‘umbrella species’ because by protecting broad swaths of habitat required for their survival, a number of other sensitive species are also protected.