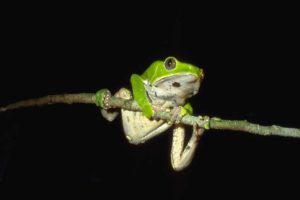 The Giant Waxy Tree Frog (Phyllomedusa bicolor) is a bright green tree frog that can grow up to 6 inches long [1]. There are several variations of its common name, which oftentimes include “monkey” or “leaf” because adults are arboreal and often found perching on the leaves of rainforest trees. This species only exists in the Amazon Rainforest, which spans parts of Brazil, Peru, Colombia, Venezuela, Bolivia and the Guianas.

This tree frog thrives in humid, wet environments, so it is almost exclusively found in rainforest environments. To further protect their skin from drying out, they secrete a waxy coating. Like most other creatures that undergo metamorphosis, Giant Waxy Tree Frogs of different life stages require different habitat. Tadpoles develop in small, still waterbodies, oftentimes puddles or ephemeral ponds, while adults reside in tree limbs of heights sometimes greater than 2 meters (6.5 feet) [2].

The Giant Waxy Tree Frog is carnivorous, eating insects and other small, live prey [1]. These tree frogs are nocturnal and live amongst the tree branches. Though males produce mating calls year-round, the peak in the Giant Waxy Tree Frog reproductive period overlaps with the rainy season in November to May [3], increasing the likelihood of offspring survival. Females lay their roughly 600 eggs in gelatinous masses folded into tree leaves, overhanging water so that as they hatch, the tadpoles may fall into the water [1].

Though the Giant Waxy Tree Frog is currently listed as ‘least concern’ by the IUCN, habitat loss or other disturbances could affect its conservation status. Researchers believe the tree frog diversity observed in the Amazon today developed as far back as 60 million years ago [4]. Meaning, major disturbances in tree frog communities could take millions of years to recover!

Amphibians, and freshwater species more generally, are vulnerable to a type of surface water contaminants, endocrine disruptors, which alter reproduction and thyroid hormone levels [5]. Endocrine disruptors are found in pesticides, cleaning agents and medications that enter waterways and may severely damage amphibian populations, even at low concentrations. Mitigation strategies include improved wastewater and solid waste management to prevent endocrine disruptors from entering waterways in the first place. Globally, amphibians are also susceptible to Batrachochytrium dendrobatidis, more commonly referred to as Bd, which is a chytrid fungus that has already led to the extinction of several frog and toad species. 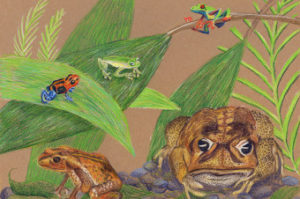 The Giant Waxy Tree Frog is a popular prey items for birds, snakes and other frogs and therefore a part of many food webs. Population decline of these and other tree frogs would impact organisms further up the food chain by depleting prey sources. More broadly speaking, tree frogs may perform certain functions that benefit the Amazon Rainforest ecosystem as a whole. A recent study reviewed ecosystem services provided by reptiles and amphibians in neotropical settings, and identified bioturbation (disturbance of sediment by living organisms – often results in mixing and aerating of soil layers and biological pest control as the most well studied services provided by amphibians [6].

The Giant Waxy Tree Frog is of interest to scientists because of its secretions. The frog produces a chemical called ‘sapo’ that is used by local Matsés people of Peru to enhance stamina while hunting [7]. While already utilized by local people, these and other chemicals produced by tropical frogs have potential for pharmaceutical development.