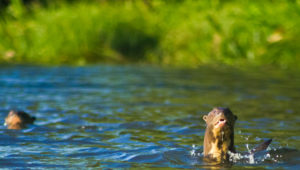 The Giant River Otter (Pteronura brasiliensis), often referred to as the river wolf, is a species in the Mustelid (weasel) family that is endemic to South America. It is both the world’s largest otter and largest member of the mustelid family, reaching up to 6 feet (1.8 meters) in length. The Giant River Otter only lives in three river systems: the Amazon, Orinoco and La Plata. With a streamlined body and webbed feet, this otter is a great swimmer well adapted to both terrestrial and freshwater environments.

The Giant River Otter lives along reaches of slow-moving rivers or creeks, especially in areas adjacent to wetlands like marshes and swamps [1]. Preferred habitat features include high banks for denning, thick vegetation and high fish densities [2,3].

This otter eats mostly fish and crustaceans, but will sometimes catch small caimans and small anacondas [4]. Due to their similar diets, they actually compete with jaguars and larger adult caimans for prey items. The Giant River Otters are such efficient predators because they have whiskers that allow them to detect vibrations in water column, helping them to locate prey [4]. And they have a voracious appetite – the otters consume about 6-9 pounds of food a day [5]!

This species is very social and lives in family groups with offspring from multiple breeding seasons.

Giant River Otters create dens by burrowing into riverbanks or under fallen logs [5]. They are also very territorial, and mark and patrol their home areas, which may span up to 12 km2 (4.6 mi2) in area [1]. 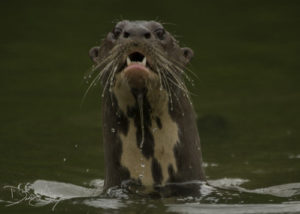 According to the International Union for Conservation, the Giant River Otter is endangered and considered extinct in Uruguay and likely extinct Argentina [6]. The otter’s decline is mostly due to hunting for the pelt trade that peaked in the early 1970’s and habitat loss, which together led to local extinctions across the otter’s range. Protective actions in the 1970’s removed the economic incentive for hunting and halted all commercial hunting shortly thereafter.

The recovery of the Giant River Otter has not been so swift, however. There are certain traits of this species that limit its population growth rate – the otters are slow to reach reproductive maturity and have low cub and juvenile survival rates [6]. And though it may seem they are widely distributed on a continental scale, they only occupy 1-5% of a given watershed. The areas they do inhabit, rivers and creeks, are threatened by overfishing, modification of otter habitat for ‘green’ energy development (i.e. hydroelectric dams), which will result in habitat loss, and mercury poisoning from illicit and unregulated gold mining and other forms of water pollution. Construction of roads and infrastructure will improve access to remote watersheds that once provided a refuge for the Giant River Otters from human disturbance. Additionally, the otters are sometimes viewed as pests or competitors and are killed by fishermen.

Though most remaining subpopulations are fragmented and disconnected, there are important subpopulations still thriving in the Amazon, which should be prioritized for conservation. Given bleak outlook, captive breeding programs will be important to long-term survival of the species [7]. 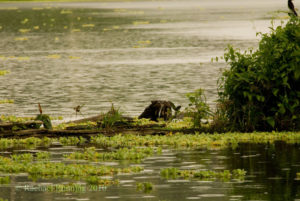