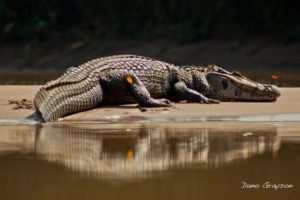 Caimans are crocodilians, or large semiaquatic predatory reptiles, found only in central and South America. There are six different species, all in the family Alligatoridae, which also includes the American Alligator. Widely distributed throughout the Amazon River basin, the Black Caiman (Melanosuchus niger) is the largest caiman species, and can reach up to 15 feet from tail to snout [1]. Consistent with the caiman’s proclivity for wet environments, its range overlaps much of the Amazon basin across Brazil and bordering countries.

Black caimans may be found along riverbanks and streams, but they especially thrive in floodplain lakes, wetlands and other inundated habitats with dense vegetation cover [2]. Their preference for slow-moving water sometimes overlaps with the preferred habitat of another species, the spectacled caiman (Caiman crocodilus), generating competition between the two species for habitat and food [3]. 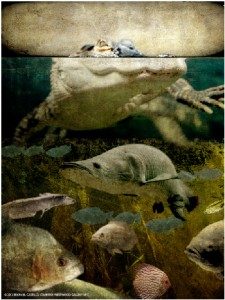 Caimans are opportunistic feeders with wide-ranging diets. Black Caiman juveniles eat mainly insects and crustaceans, but as they grow larger and their gape size increases, their diet shifts to include terrestrial vertebrates, snails and fish [3].

Like all other members of Alligatoridae, female caimans build nest mounds in which they lay an average of 39 eggs in a clutch [2]. So many eggs are laid because not all will have the opportunity to hatch. A study conducted in Ecuador suggested that in some areas, nest flooding presented the greatest threat to black caiman eggs, not predation [4]. For caimans (and many other egg-laying animals), the evolutionary strategy of producing a large clutch size ensures that despite somewhat high risks of embryonic mortality, at least several offspring will survive to adulthood.

Poaching for black caiman skins between 1940 and 1970 led to serious population declines in the latter half of the 20th century, so much so that the species was at one point listed as endangered [5]. When black caiman harvest sizes diminished, hunters switched to the spectacled caiman [6]. Decreased global demand for skins and protective actions by CITES (the Convention on International Trade of Endangered Species of Wild Fauna and Flora) have allowed caiman population numbers to recover – all species are now listed as ‘least concern’ according to the IUCN, though the designation is dependent upon enforcement of the CITES listings. These species were in part able to make a comeback because remote, inaccessible habitat in the Amazon basin provided a refuge for some individuals from poaching. For this reason and many others, protecting remaining swaths of the Amazon is crucial for wildlife preservation. 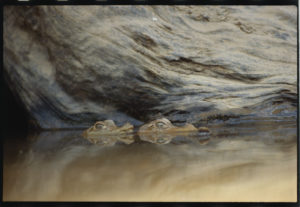 Caimans and other top predators tend to bioaccumulate toxins in their tissues from consuming many prey animals with some degree of exposure. Therefore, they have potential to be reflections of their environments. A recent study in 2015 demonstrated that the bony plates of caimans, which are made of keratin, accurately reflect environmental exposure to heavy metal toxins such as mercury [7]. This presents a non-invasive method to quantify the bioaccumulation of a contaminant in caimans due to polluted waterways.