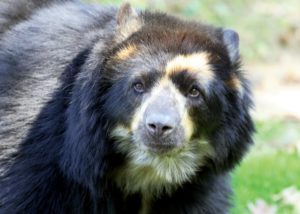 The Andean Bear (Tremarctos ornatus) is the only bear in South America and the smallest member of the bear family, Ursidae. The Andean Bear is also commonly referred to as the Spectacled Bear because of the distinctive cream or brown markings sometimes found around the eyes. With a characteristically short muzzle, it is the last living species in the subfamily of short-nosed bears [1]. Andean Bears are endemic to (or only found in) the Andes and neighboring mountain ranges from western Venezuela south to Bolivia.

Andean bears predominantly inhabit mountainous terrain at elevations reaching as high as 14,000 feet above sea level [2]. They occupy a variety of habitats like rainforest, cloud forest and dry forest, but will venture to lowland areas such as humid grasslands, coastal deserts and even agricultural lands to forage.

These bears are mostly vegetarian, consuming fruits and flowers – bromeliads, a flowering succulent, are among their favorites! They will sometimes supplement their diet with small rodents, birds and insects, making them the largest carnivores in South America. When they encounter agricultural lands, the bears will occasionally consume domestic livestock and crops, which often leads to human conflict.

Andean Bears are generally shy and solitary, but may congregate around food sources. Like other bears, they build tree platforms made of broken branches and sticks to rest upon or use as a feeding site. But unlike other bears, they do not hibernate because food sources are available year round. They are mainly diurnal, or active during the day, though reintroduced bears in Ecuador are mixed diurnal or nocturnal [3].

Currently listed as vulnerable to extinction, the greatest threat to the Andean Bear is deforestation and subsequent habitat fragmentation [4]. Also threatened by poaching, they are sometimes hunted for their meat, or body parts, specifically gall bladders and paws, which are highly prized in traditional East Asian medicine [5]. Farmers may also kill the bears if they are perceived as a threat to crops or livestock.

Continued development in the Amazon for mining and oil extraction operations severely impacts the likelihood of long-term survival for the Andean Bear. Construction of roads and other infrastructure have decreased the number and size of viable bear habitat patches. As an animal that exploits a variety of habitat types and food sources, access to well-connected forage areas is crucial. One study suggested that with increasing human population density in the Andean Bear range (and associated habitat loss), the species might meet the criteria of the endangered listing as early as 2030 [6].

Andean Bear foraging is a key ecological component in the Amazonian Andes and adjacent ecosystems. The bears act as seed dispersers, especially for laurels (type of hardwood trees). By consuming and passing seeds unharmed by their digestive system as they roam, they help to establish seedlings throughout their range. And as large carnivores, Andean Bears mediate ecological community structure – their presence (or absence) affects population sizes of prey items, many of which are herbivores, producing a cascading effect on plant communities [7].