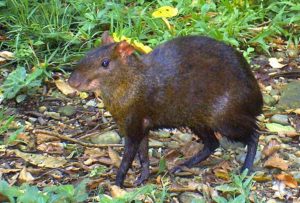 Agoutis are rodents in the genus Dasyprocta, which consists of 12 known species found throughout Central and South America. These small mammals may grow up to 2.5 feet long and weigh up to 13 pounds [1]. Their fur comes in many shades of orange, brown and black, with individual hairs having alternating black and buff bands creating an agouti pattern. Most species exist in small habitat ranges in the tropical Americas – some are even restricted to single islands. A few species, however, are more widely distributed in the Amazon rainforest, and those include the Black-rumped, Red-rumped and Black Agoutis.

Agoutis mostly inhabit lowland and montane tropical forests, but some live in drier environments like savanna or scrub lands [1]. They will also live in gardens or farmland so long as adequate ground cover is present. Agoutis seek out habitat with dense cover because it offers protection from feline predators like coatimundis, jaguars and ocelots. They make their dens in burrows between boulders, roots and bushes or in tree hollows, often near swamps or other aquatic environments.

While fruit is their preferred food, agoutis are equipped with sharp incisors to crack the hard shell of nuts [2]. When neither fruits nor nuts are available, they will eat alternate food sources such as fungi, insects and plants. Agoutis are quite territorial and mark their area with urine or other sources of pheromones. And they are fast and agile, capable of jumping several feet high and spinning while in mid-air to evade their many predators.

According to the IUCN red list, the Amazonian agouti species are of least conservation concern, while others are vulnerable to extinction or data deficient, meaning scientists are unable to evaluate their conservation status until further research is conducted [3]. While agoutis are capable of adapting to disturbed or non-forested area so long as sufficient cover is provided, they still depend on connected habitat patches. This is because they need large areas to court and breed, and therefore do not thrive in captivity.

Agoutis engage in scatter-hoard behavior, in which they cache seeds beneath the soil, dig them up and rebury them again and again. Agoutis are the only animals known with strong enough to teeth to break open the tough Brazil nut pod, and therefore are important in the seed dispersal process for the Brazil nut tree, a commercially valuable species. This scatter-hoarding behavior has led to a mutualism, or mutually beneficial relationship, between agoutis and Brazil nut trees. In this relationship, Brazil nut tree seeds are effectively removed from the pod and distributed throughout the agouti’s habitat, and perhaps ultimately providing nourishment to an agouti if eaten, or sprouting and eventually growing into a mature tree.

When larger herbivores, like the giant ground sloth, once roamed the Amazon basin thousands of years ago, they consumed and passed seeds, facilitating seed dispersal for several tree species. Recent research suggests that scatter-hoarding rodents such as agoutis may substitute for seed-dispersing megafauna that reigned the landscape ~10,000 years ago [4], allowing for many tree species to continue to flourish in the Amazon. While agoutis depend on Amazonian forests to provide shelter and food, the forests depend on agoutis to help spread seed and propagate new trees.