Water is a compound essential for life. It makes up about 60% of the human body and covers about 71% of the Earth’s surface. Yet researchers from the University of Exeter and Colorado State University, using computer modeling, showed evidence that the Amazon Rainforest is more equipped to survive droughts than previously thought. The reason for this is the Amazon’s ability to recycle moisture, however this only works in large areas of undisturbed forest. Thus, considering the likelihood of warmer and drier environments in the future, it is essential that the Amazon retain a high tree density in order to ensure that moisture recycling can continue. 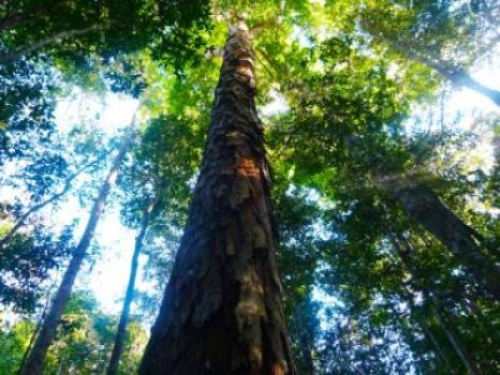 Many climate models over predict the water stress plants feel during the dry season because they don’t take into account the moisture that the forest itself can recycle in times of drought. Photo by Peter Cox, University of Exeter.

The moisture present in the soil contributes to the hydrologic cycle and overall rainfall, which in turn re-saturates the soil. The Amazon’s survival does not solely depend on the presence of water in the soil, but also the plant’s ability to absorb the water. There is a maximum level of access to soil moisture for trees and plants, putting stress on the vegetation. The process of moisture recycling can help reduce or delay this stress by increasing atmospheric moisture and, consequently, rainfall. This makes it crucial that forested areas be left in tact so they can maintain the process of moisture recycling and have some level of natural defense against increasing temperatures. The rainforest has the capability to take care of itself and respond to its immediate environment, but does this best when it is left intact.