While in Geneva in late May, repre 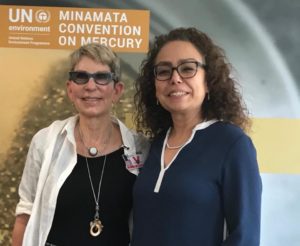 sentatives of AAF had the opportunity to meet with key team members of the UN working on ratification and implementation of the Minamata Convention, which seeks to reduce mercury pollution from the targeted activities responsible for the major release of mercury to the immediate environment all over the globe. AAF’s Sarah DuPont, who has spent the last 6 years actively lobbying for ratification of Minamata as an integral part of working for positive change in Madre de Dios and similarly affected mining communities world-wide, met with Rossana Silva Repetto (originally from Peru), Executive Secretary of the Secretariat of the Minamata Convention, and Sheila Logan, Programme Officer, Minamata Convention on Mercury, who served  with Sarah duPont on a discussion panel following the screening of River of Gold at Graduate Institute of Geneva on June 5 (see blog post here).

The Minamata Convention is Initiative #2 on Amazon Aid’s Riv

er of Gold Social Impact Campaign (see page 9 – https://amazonaid.org/wp-content/uploads/2018/05/Amy-Edit-5-10-18-River-of-Gold-Social-Impact-Campaign-Overview.pdf). As of this publish date, 128 countries have signed the Minamata Treaty. The Convention is now closed to new signatories, but countries are still being recruited to ratify the Convention and become a Party, binding that country under international law to the provisions of the agreement. There are currently 92 Parties. To get updates about new parties to the Convention visit mercuryconvention.org or follow @minamataMEA on Twitter.