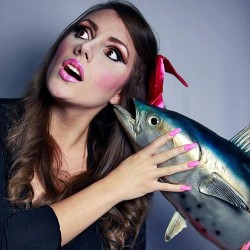 “Our life is where we can breathe. We create through breathing. We love because we breathe.

We are often afraid to care, and be aware of the things that directly affect our existence. Unaware that the air is the one that enables us to be happy and chase our dreams and live long enough to make them come true, taking our own lives for granted. Unaware of the fact that that priceless transcript of a simple yet wondrous Amazon orchestration is fading, disappearing and being destroyed. Let’s raise awareness, make it live, fight for our existence.

Nature and life are such great inspirations for invention and creation. I grew up in a family of artists, both parents well known European painters and sculptors, and throughout my childhood I was surrounded by paintings of forests, which are both my mother’s and father’s eternal inspiration, and my dad’s wooden sculptures of rain. And as a child I was fascinated by its beauty and the life which breathes through it. We were taught to learn how to enjoy, smell and love the nature as it is a part of us.

We think because we are able to breathe, and that makes us free. Let’s not let anyone take away our freedom.”

Recognized as one of jazz’s pre-eminent vocalists, Sofija Knezevic is one of the most significant singers in jazz today. While her singing is steeped in tradition, her improvisational virtuosity and creativity are breathtaking.

Sofija graduated from University for Music and Performing Arts in Graz, Austria, in the class of Dena De Rose. She has won many awards and scholarships including the Marianne Mendt Jazz Award, Unesco Scholarship for young talents, Golden Siren award, and was recently chosen in 2013 for the Betty Carter Jazz Ahead program which identifies outstanding, emerging jazz artists and composers.

She’s been based in New York since 2011, and teaching voice at the Music School of New York City since 2012. She is also an ambassador of ICAF (international child art foundation) , CYE (Celiac Youth of Europe), one of the ambassadors for the Estee Lauder Breast Awareness Campaign, and an Amazon Aid Foundation “Artist for the Amazon”.

Sofia is listed as first of Elle Magazine`s 30 under 30 (30 most successful people under 30 years of age), and number 3 on Cosmopolitan Magazine’s list of the most beautiful women. She is also included in the Jazz Encyclopedia `Serbian jazz, Bre`, and has just published a book of her own “Evolution of Voice – The Art of Breathing” in 2019.

Sofija organized and performed at many humanitarian events, including the support for the Sandy Hook victims in 2013. She has written and recorded music for numerous movies, including the documentary about her life, the movie ` Love Comes After `, ‘Our guardians/ a little homage’ , and Balkan Spirit ` by Hermann Vaske where she appeared together with Marina Abramovic and Angelina Jolie.