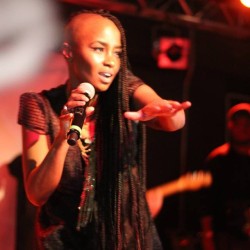 Since graduating from Berklee College of Music in 2011, emerging artist Shea Rose has been celebrated for her contributions to music, fashion and philanthropy. Hand-picked by legendary musician and actress Queen Latifah for a CoverGirl music campaign and BET Awards appearance, Rose was coined “America’s next generation of female talent” and has been described by former Boston Globe music critic Steve Morse as “that rare artist who can bridge diverse styles such as soul, funk, rock, rap and jazz — and bring her unique stamp to each.”

Rose’s first release, the “Rock ‘n’ Rose” EP (2010), was an introduction to her genre-blending style, followed a year later by the “Little Warrior” Mixtape (2011). Both releases showcase her range and versatility with songs that highlight her influences, from Lauryn Hill to Lenny Kravitz. Jed Gottlieb of the Boston Herald describes her repertoire as “sweet folk ballads, thunderous hard rock, and deep funk. She also raps with a wicked flow that belies her newcomer status.”

“Little Warrior” is not only the title of her album, but a moniker that Shea Rose embodies physically and artistically. Rose expresses the “Little Warrior” on stage through her music and fashion sense, and in her daily life with her music for social change initiatives and outreach. A “Little Warrior” is a woman who is empowered, independent, resilient, and kind. She stands up for others and boldly goes after her vision. She’s a survivor! Proud of who she is and what she represents, her stride is confident and graceful. Everyone has a different battle to fight, from musicians to politicians to mothers and everywhere in between. Rose believes we all have the power to face our battles with faith, strength and courage, embracing our inner warrior.

Rose was named the 2012 Pop/R&B Artist of the Year and the 2011 R&B/Soul/Urban/Contemporary Artist of the Year at the Boston Music Awards, and was also labeled the “artist most likely to make an impact on the national stage” by the Boston Globe. In addition to her independent releases, Rose is a featured songwriter and performer on two Grammy award-winning jazz albums, “The Mosaic Project” (2011) and “Money Jungle: Provocative in Blue” (2012), both produced by legendary drummer Terri Lyne Carrington and featuring an all-star cast of musicians including Esperanza Spalding, Patrice Rushen, and the incomparable Herbie Hancock. Rose received a SESAC National Performance Activity Award for her collaboration on “The Mosaic Project” and was honored by the Songwriters Hall of Fame with a scholarship award for ‘excellence in songwriting.’

In addition to her music accolades, Rose was named one of the “Most Stylish Bostonians,” gracing the cover of Boston Globe magazine’s annual style issue, and has also appeared on the covers of Improper Bostonian, Exhale and Performer magazines. She’s been featured in brand campaigns for CoverGirl, Tory Burch, Puma, Plndr and Converse, and she made her international television debut hosting the “Boston Contemporary” episode of CNN’s travel and lifestyle show, “CNNGo.” Rose has shared the stage with Gladys Knight, Macy Gray, and Talib Kweli, and she has performed internationally in Bucharest, Romania, Athens, Greece, Naples, Italy, St. Michaels, Barbados, Santiago/Havana, Cuba and Kingston, Jamaica.

Off stage, Rose is dedicated to working with local and national communities through her music for social change initiative, “My Angel Wears A Fro.” Her outreach includes volunteering, live and in-studio performances, coaching, workshops, lectures, and clinics. She has worked with over 30 community organizations and served as an AmeriCorps State and National program volunteer for two years. Rose is the recipient of the Berklee College of Music, Walter W. Harp Liberal Arts Music and Society Award for her demonstration of outstanding achievement in research, civic engagement, and performance relating to music and society. She is an artist representative for Music2Life, a non-profit foundation started by Noel Paul Stookey of Peter, Paul and Mary, and she is a partner with the Safer is S.E.X.Y. campaign, spreading HIV awareness amongst teenage girls in underserved communities. Rose recently gave a TEDxTalk on discovering and expressing her inner voice entitled, “Somebody Stole My Voice Again.”

Rose was invited by the Amazon Aid Foundation and Rhythm of the Universe (ROTU) to write a song for the rainforest entitled “Anthem for the Amazon.” She’s also the voice over talent for “Mercury Rising” an Amazon Aid documentary .