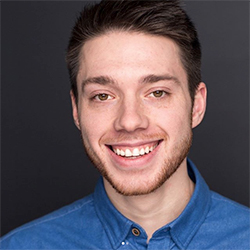 It is a part of our human nature to have an active connection with nature, it is the very word itself! It is up to humanity alone to decide whether we want to treat this world as disposable, or preserve it for ourselves and all future generations to come.

Ryan DeFranzo is a performer, musician, and composer based in NYC. Growing up in Connecticut, Ryan Studied classical piano before being introduced to his love for the theatre and starting to write his own music. After that, acting, singing, and creating music became an inseparable trio. Ryan is either performing on the stage, conducing the musicians in the pit, at his piano- or al of the above!
After completing his studies in Theatre at Marymount Manhattan College, he has formed a small new production company whose goal is to raise awareness about important world issues and spark a hands-on effort to aid them by uniting people through art. the productions company “NoTime Productions LLC” has just announced their first project, an environmentally aware story told through music and dance called “TARA”. A portion of the proceeds will be given to carefully selected organizations that give back to the environment.
Visit Ryan's Website