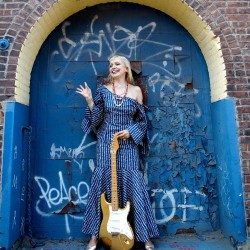 I remember when I was 7 years old, there was a huge tree in the forests near the farm where I spent summers. It had been struck by lightning twice. To keep it from falling and dying, the people of the village had put steel bands around its trunk. One branch was fairly close to the ground, almost forming a cave, and another one a little to the side and higher up. The tree looked strange because of it, a little crooked, but beautiful and majestic nevertheless because of its sprawling branches and soft green leaves, that whispered in the wind.

My mother told us to stay away from the tree because, in all likelihood, another lightning was bound to come and strike it, and us. I sat under this tree for many hours, waiting for the lightning to come. Now I know why people had gone to such length to save it. The farmers knew that without the trees that their crops would be in danger, as it is the trees that hold the water in the ground.
New York based guitarist and singer/songwriter Leni Stern has spent years making musical pilgrimages to West Africa, especially Mali, and bringing back intriguing recordings of her songs, played with amazing traditional musicians she has befriended. And beguiled, with her soft, clear singing voice, sweet and stinging electric guitar playing and gentle wit.

Leni Stern is an electric guitarist, singer/songwriter, and ngoni player. Born in Munich, Germany Ms. Stern came to the States to attend Berklee College of Music where she studied film scoring and composition. It was there that she began to hone her guitar skills, ultimately moving to New York City to start her first band with Paul Motian and Bill Frisell. It was not long after that she established her own label Leni Stern Recordings, ensuring that she would retain full artistic control of her diverse projects.

As a bandleader Leni has composed and released 21 albums to date and toured the world as both a teacher and performer, ensuring that the next generation of musicians are inspired to continue the mind-melding and cultural exchange that is so central to Leni’s musical intentions. Through her compositions, listeners worldwide are able to experience a wide range of cultures and languages that trace the interconnectedness of music, history, and humanity.

In the past 13 years, Leni has forged a new sound that is uniquely her own by combining the rhythms and tonalities of West Africa with her expertise as an accomplished jazz guitarist. What emerges is a new repertoire of cross-pollinated ideas and reverence to jazz, to blues, to Africa, to a folkmusic of today’s diaspora.

Leni has received many recognitions through her impressive career, including being featured on WBUR, Boston’s NPR affiliate, as the cover story for the Santa Fe New Mexican[2].  In 2016 she was a headline performer at Africa Festival in Wurzburg, Germany[3].  Leni was named in Guitar Player’s 50th Anniversary Issue (March 2017) as one of the Most Sensational Female Guitarists of All Time[4].  In 2018 she was selected as an official showcase performer at South By Southwest (SXSW) in Austin, TX[5].

The Washington Post: “Stern doesn’t collaborate with the West Africans so much as commune with them, she never sounds out of her element, even when her pop and jazz sensibilities are most apparent.”

Downbeat Magazine: “The integration between Stern’s music and the Mali musicians’ mastery is nearly seamless.”