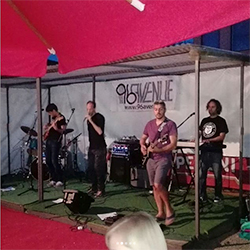 It is not just about Amazon, it’s about the whole planet. We are very shocked about what is happening in Brasil, we would like to give our help, that may be a little one, but we strongly believe that anyone has to do his part. We cannot just wait and see, expecting for big names or companies or governments to do something. Every single person, artist, little band or Group of people can do something. That’s why we want to collaborate, that’s why we want to add our voice to other voices, that’s why and how we want to give aid. We are not that famous and this is exactly the message we want to bring: you don’t need to be famous to help.

Called 96Avenue, the band was formed in November 1996 with the name Arcadia. United by a passion for good music and a close friendship, its members embarked on a project that lead them to the recording of a first album  in 1999. Recorded in English, intentionally home-made, the disc “Jesters on square” represented only the beginning of a beautiful adventure.

The influences of progressive music can be felt during live performances, always characterized by the desire not to compromise and present one’s own unique style. In this way the Arcadia immediately brought itself to the attention of critics.

Over the years there have been numerous performances in clubs and stadiums in Milan and the hinterland and in the most important music festivals in Lombardy. The repertoire presented by the group includes numerous covers by national and international artists and crosses rock in its different expressions.

Above all, live performances are an opportunity to present unpublished pieces to the public. The variations in the formation do not slow down the activity of the band, which continues in the composition of original music, moving towards an advanced and sophisticated sound.

The result is called “Lights”, recorded in 2005 at the “Frequenze” studios in Monza. The musical identity is increasingly clear and leaves room for sound experiments and melodic-rhythmic varieties. During the promotional activity, the recorded songs are rewritten and also presented in Italian.

In the years following the release of the second album, the live activity is managed aiming to enhance the performance and care of the show, keeping faith with the primary goal of spreading and expressing their own musical compositions, thus establishing a special feeling with the public.

Ten years after its establishment, in Milan and its province, Arcadia is synonymous with quality, experimentation and uniqueness, characteristics that allow it to land on decidedly important and prestigious squares. But the research does not stop, there are many ideas and the desire to work on a musical product of ever higher quality puts the band’s creative spirit into motion.

The desire to reach artistic maturity leads to the search for professional environments, where one can confront the experience of those who have made music a reason for living. The band presents itself with new songs and ideas at the historic “Logic Studio” in Via Piacenza, welcomed by Carmelo La Bionda. Quickly a selection of songs is made and you start working on a “best of” of what you composed in previous years. The studio work is not limited to recording only. In a completely natural way, a co-production is born, under the guidance of the famous sound engineer Gabriele Gigli, who is passionate about and collaborates strongly in the creative and experimental process. The project will continue with the intervention of Antonio Nappo, another young and talented sound engineer, who will finish the recordings and prepare the final mixes. The production will end between Milan and London, in the legendary Abbey Road studios.

The conclusion of the third album, entitled “Distance”, marks an important turning point in the group’s career. The news are many and important: the entry of a new guitarist, the choice to continue the adventure with a new name “96Avenue” and the collaboration as publisher of the record company GRecords, are the new steps of a band that continues its history, true to its identity, in continuous search for new horizons.

The present and the future are and will be made of collaborations, research, radio experiences, new waves of sound, a stress on a really indie nature that wants to preserve good music, true feelings, a friendly approach, the predominance of good life principles to be spread with somng lyrics, respect for every little part of the intense artistic work.