The Making of River Gold

In the summer of 1999, I journeyed to the Peruvian Amazon, a remote and pristine area, the largest piece of contiguous rainforest left on the planet. There we meandered along undulating brown rivers by boat, the best way to traverse this dense and roadless place. I was traveling with an intrepid group of scientists. Our destination was the research station we had built to study and protect this critical ecosystem. I came to learn firsthand how the Amazon is one of the most important places for the stability of our environment; not only is the Amazon an untapped plethora of important species, it also houses countless trees that keep the world’s weather pattern steady.

Since that time, I have been fortunate to travel back to the jungles of the Amazon. But it has become a different place. Roads have been built and people have arrived. It has become a new wild west, a place without law. People driven by poverty and the desire for a better life have come, exploiting the sacred ground. Almost 10 years after my first trip to the once pristine Amazon, I could no longer travel the rivers without witnessing mass ecological destruction. In desperation, I gathered a team of some of the best scientists, environmentalists, and artists to document this tragedy. I wanted to create a film that is both beautiful and informative; one that I hope will affect the audience so that they too can step forward to protect the Amazon and ensure that the future climate of the world is as we know it today.

But how was I to deliver this message? How could I get people to pay attention in this chaotic time? For me, I knew that it felt like war. A war against the environment. Ecocide. Then a thought was born. Why not make a documentary that follows journalists who specialize in war reportage, filming them as they witnessed this broad, far reaching, and criminal eradication of the Amazon? This film would capture this war against nature. 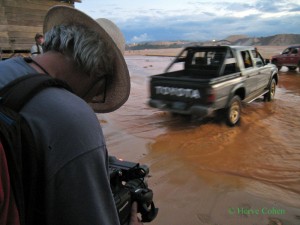 River of Gold was indeed a very difficult and dangerous film to make. As the producer I was at times very concerned for the safety of the team. We were documenting places where outsiders are never allowed. The stakes were high and we knew that filming illicit mines would not be welcomed. Moments of the shoot were thick with tension; we were skirting danger, not knowing if we would be able to complete our mission successfully and safely. But thanks to our courageous and talented crew, we can home with 26 hours of horrible, poignant, yet beautiful imagery for the world to see. We can now all witness young men standing in barrels laden with mercury, child prostitution and slavery, and the majestic trees once filled with the joyous songs of birds now turning into desolate and toxic soil- all gone in the quest for gold.

And what is this destruction worth? Does the sparkling superfluous glitter of gold outshine all other necessary elements of life? This beautiful and intricate web of life that we have been given to nourish our bodies and souls is being destroyed. And for what?

Humans have the capacity for greatness and the ability to create solutions. I believe in grace. River of Gold was made in the hope for a safe and healthy world.