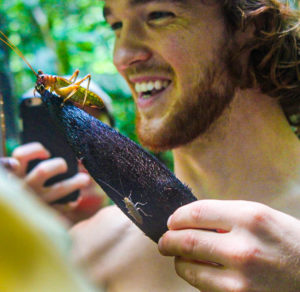 by Matthew Abeler
Artist for the Amazon

They sound like orcs in the Lord of the Rings.Strange thoughts cross my mind at 6:00 a.m. Is there a dinosaur loose in the Amazon? A few days into the rainforest, I learned quickly not to fear the howler monkeys. They’re just rowdy neighbors. Now they’re getting on my nerves like an alarm clock without a snooze button.“Alright, alright, I’m awake already.”I slip out of my hammock and crack every limb in my body. Good morning, Camp 41. I tear off my shirt and hobble down a sandy trail to a small river. Plunge inside the cool water. Float on my back and stare up at the sky. 50 shades of green. The sunlight dances through the leaves, but it’s nothing compared to what I’m about to experience.

Pick-up trucks full of curious travelers, nature lovers, and biologists creep down precarious dirt roads. They crawl to a stop at the National Institute of Amazonian Research Observatory Tower. The steel structure reaching above the rainforest canopy doesn’t have a special name but definitely deserves something more worthy, something cool like J.R.R. Tolkien’s Eye of Sauron. As we march to the top of “The Eye” it sways beneath our feet. The wizard guiding us to the summit is Dr. Thomas Lovejoy, who has been making voyages into the Amazon since the 1960s. There were only two demarcated areas for indigenous groups at that time, now there are more than 450 formalized territories covering 13% of Brazil’s landmass. 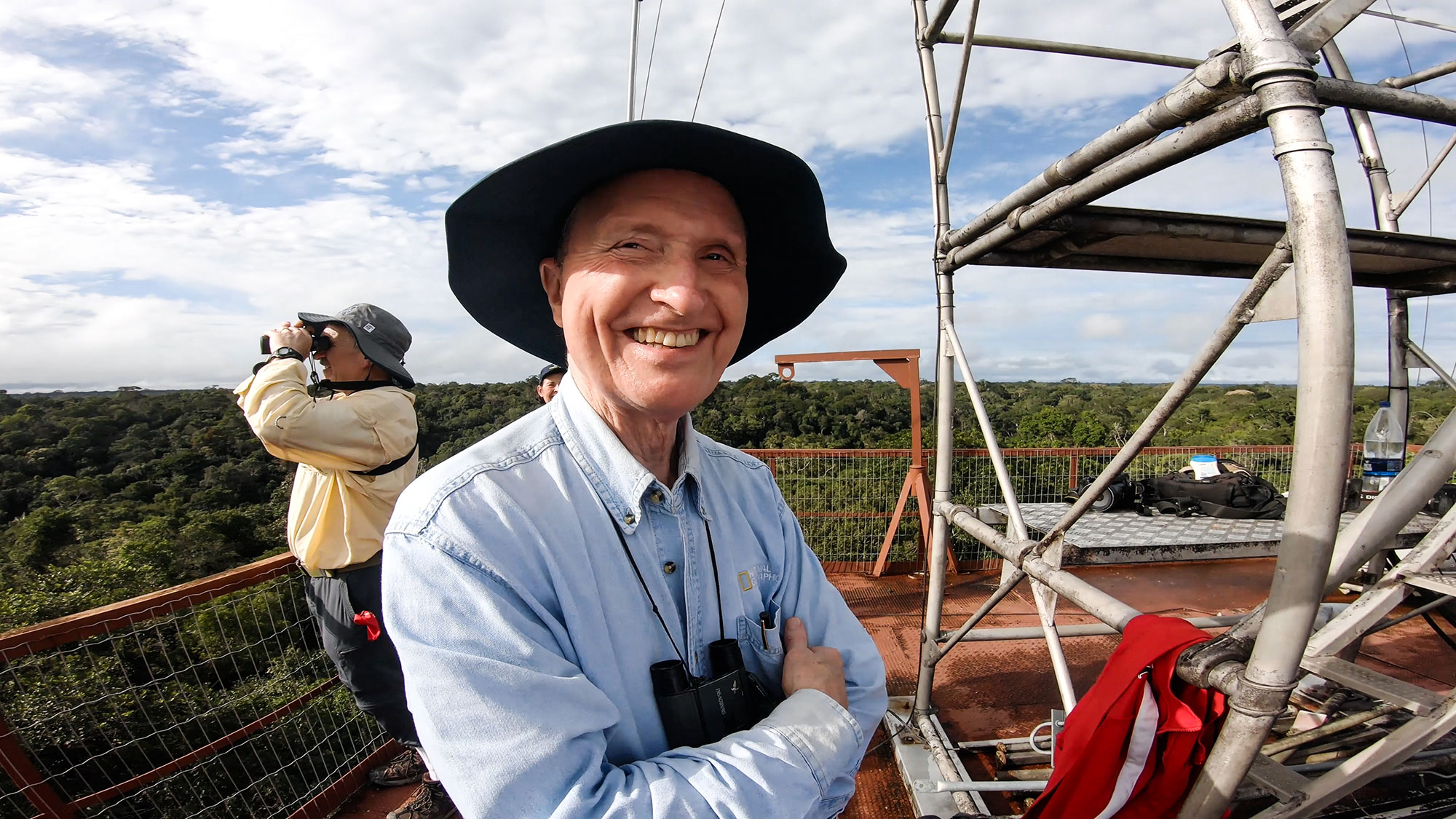 “How many times have you done this?” I ask during our ascent. “I’ve lost count,” he laughs back. There’s that playful smile.Dr. Lovejoy is famous for coining the term “biological diversity.” As someone who didn’t know him before this trip, it’s a weird feeling having used the phrase in conversations and bumping into the person who invented it. Do I owe him royalties every time I speak it in his presence?

In 1978, Dr. Lovejoy founded a research reserve in the Brazil’s Amazon north of Manaus called the Biological Dynamics of Forest Fragments Project (BDFFP). As cattle ranchers were moving into this area and clearing forests, Dr. Lovejoy seized an opportunity to respond to the “Single Large or Several Small Reserves of Equal Area Debate” (aka SLOSS). The question at stake: Does species richness increase as the area of a forest reserve expands? And will species richness decrease when area size contracts? The lack of critical evidence to establish a solid conclusion gave rise to Dr. Lovejoy’s experiment.Today the BDFFP reserve stretches 620 square miles and includes a series of forest fragments ranging from 1 to 100 hectares in area. Sections of the original forest still remain. 40 years later, many of the cattle ranches have come and gone. Some of the fragments are now surrounded by second-growth. Abandoned ranches are starting to sprout as rainforest again. A ghost town never looked so green. The dynamic relationship between cleared forest plots, original forest, and second-growth makes this a coveted location for scientific research.This is my first time at the reserve. I’m not a credentialed biologist. I talked my way here by offering to point and shoot a camera. All of this new information was a lot to chew on. Step by step we finally reach the top of “The Eye” and some things start to click. 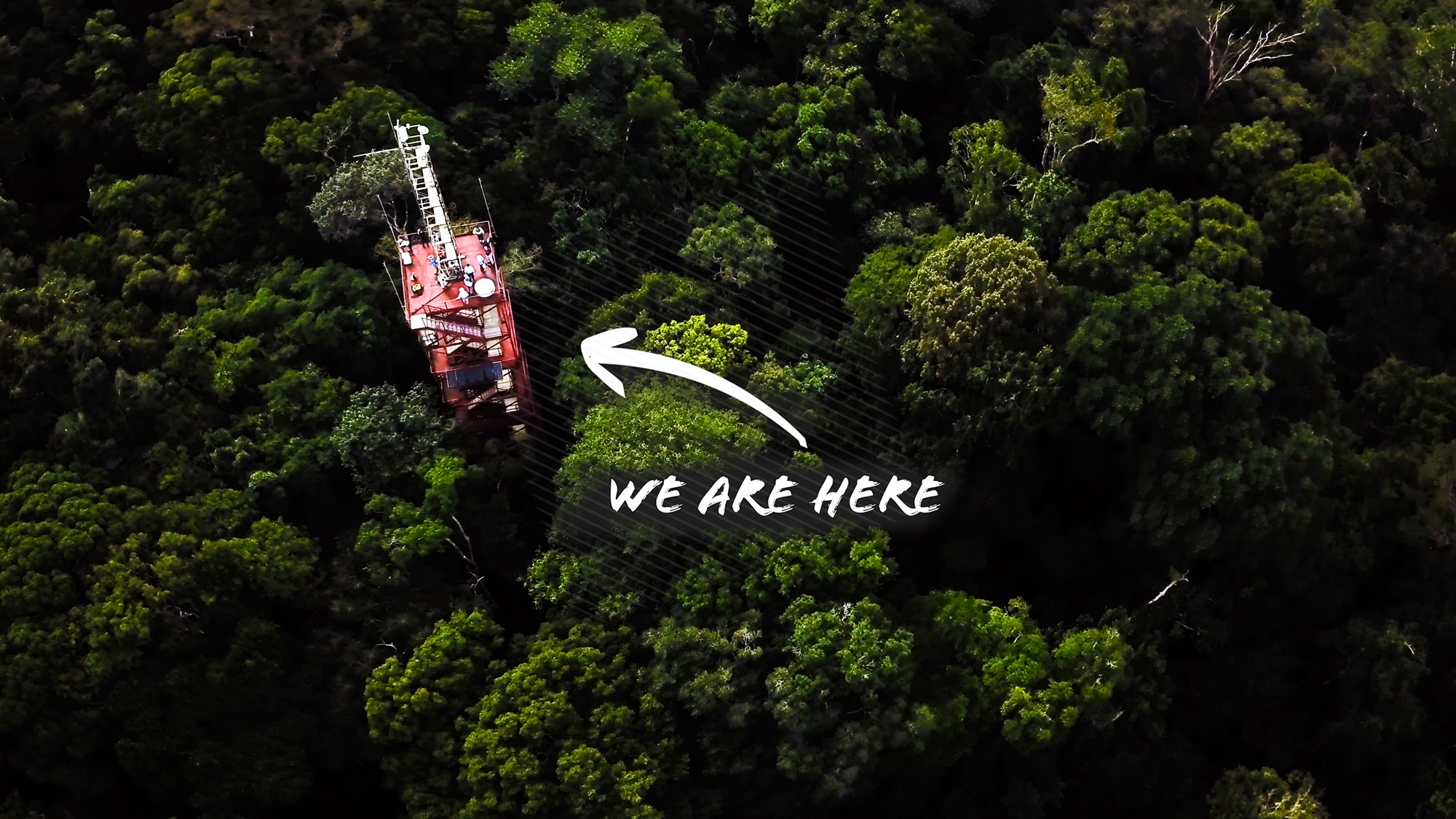 “Matt, capture some of that hydrological cycle. Some of that moisture coming out. It will be gone in a half an hour,” directs Dr. Lovejoy.I kick up my drone into the air and fly it toward the thin strips of mist rising from the canopy.“Every country in South America receives moisture from the Amazon, except for Chile,” Dr. Lovejoy continues. This fact stopped me in my tracks. The clouds of steam that I’m flying over are really geysers. The Amazon is not just billions of trees, it’s a giant irrigation system.There are an estimated 390 billion trees in the Amazon. One large tree can transpire 1,000 liters of water into the atmosphere in a single day. Across the vast Amazon that translates into about 20 billion tons of water daily. With the largest volume of water of any river on the planet, the Amazon dumps 17 billion tons into the Atlantic every day. That’s a lot of water but it is surprisingly LESS than the water transpired by the forests. 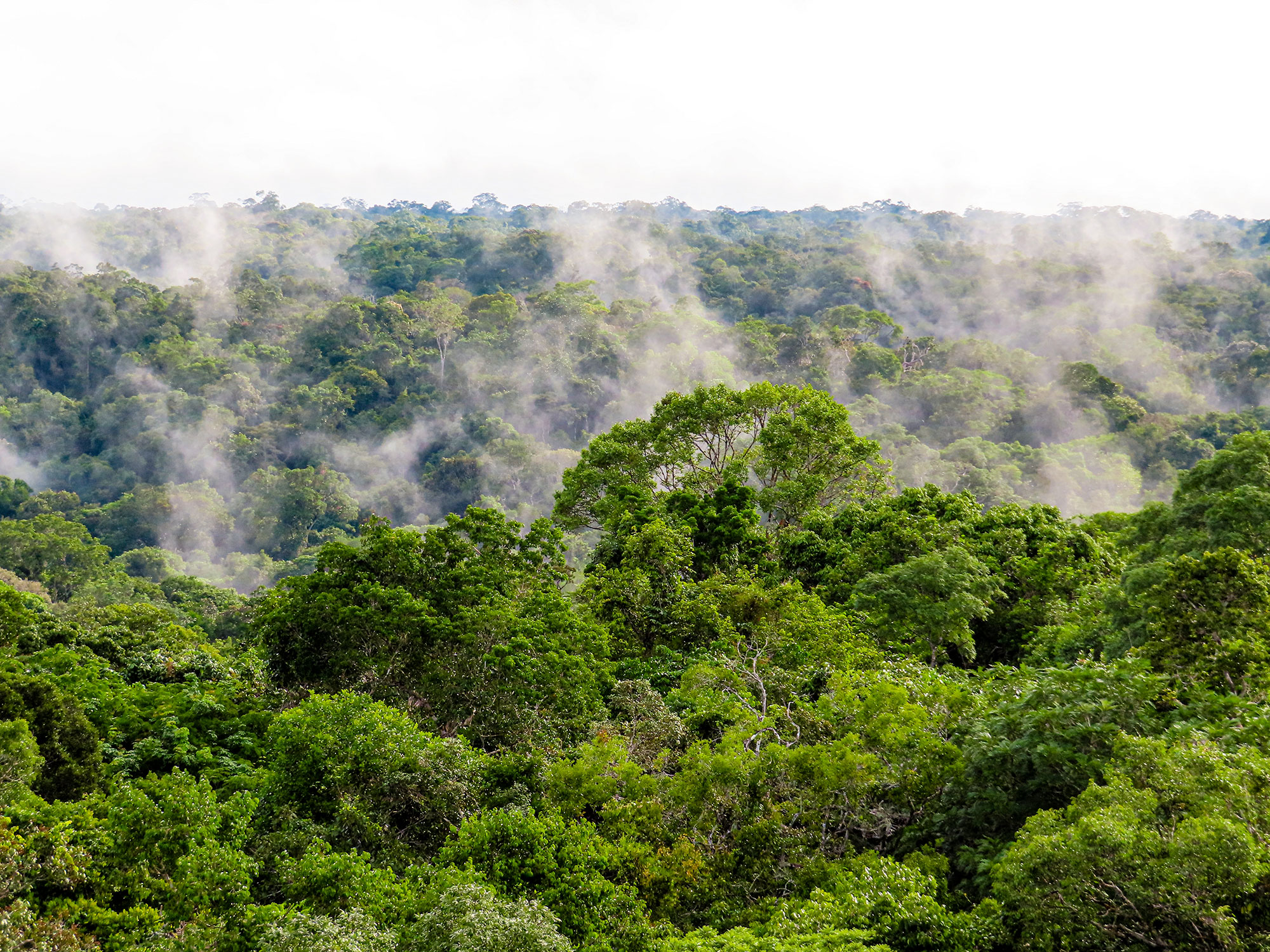 These realities changed my entire outlook on the value of the Amazon. What would be the sticker price for an irrigation system large enough to supply an entire continent? Imagine installing such a watering system across the entire Sahara desert. How much would that cost? The economic benefits of rainfall from the Amazon are far greater for South America than any of the industries that might capitalize off of destroying it. It’s easy to take that value for granted until it’s gone. Consider this fact. An estimated 70% of South America’s GDP is produced in areas that receive water or rainfall from the Amazon. Maybe some of the treasures that come to us free and easy are too normal to give a rip.I’ve sometimes felt this way about the sun. It gives its light and energy for free. Every day it’s the same. But how would we be able to live without it? It seems a little absurd for human civilization to destroy it and claim it under the name of economic progress.There are similar absurdities in destroying the Amazon. If mining, ranching, timber, and agriculture are not carefully balanced with respect to the hydrological cycles of the Amazon, the current economic benefit will be short-lived. To make up for what’s lost, a big price will be required – but who will pay it? To respect and preserve the Amazon’s rainfall cycles is to care for the economic future of millions of people in South America. The main point is this: the Amazon is life. It’s bright green shades of money everywhere you look. Sustaining it is by far a cheaper option than trying to grow it back from scratch.This is one of the important issues that Dr. Lovejoy is trying to bring to public awareness today. He’s been translating the scientific wisdom gained from the BDFFP into guidance for policymakers that can protect the Amazon and other rainforest ecosystems. In 2018, he founded the Amazon Biodiversity Center to help sustain research at the BDFFP. The Center is a lab for conservation scientists, a classroom for students, and an inspiration to world leaders to preserve the Amazon.I land my drone back on “The Eye.” Step by step, we retreat from the tower. There are more things to see. On our hikes, we find one of the world’s smallest lizards, bearded saki monkeys, and a red-and-white striped snake that looks like the venomous coral snake. It’s just a fake. I mean it’s a real snake, but I’m happy to hold slithery things that won’t kill me. 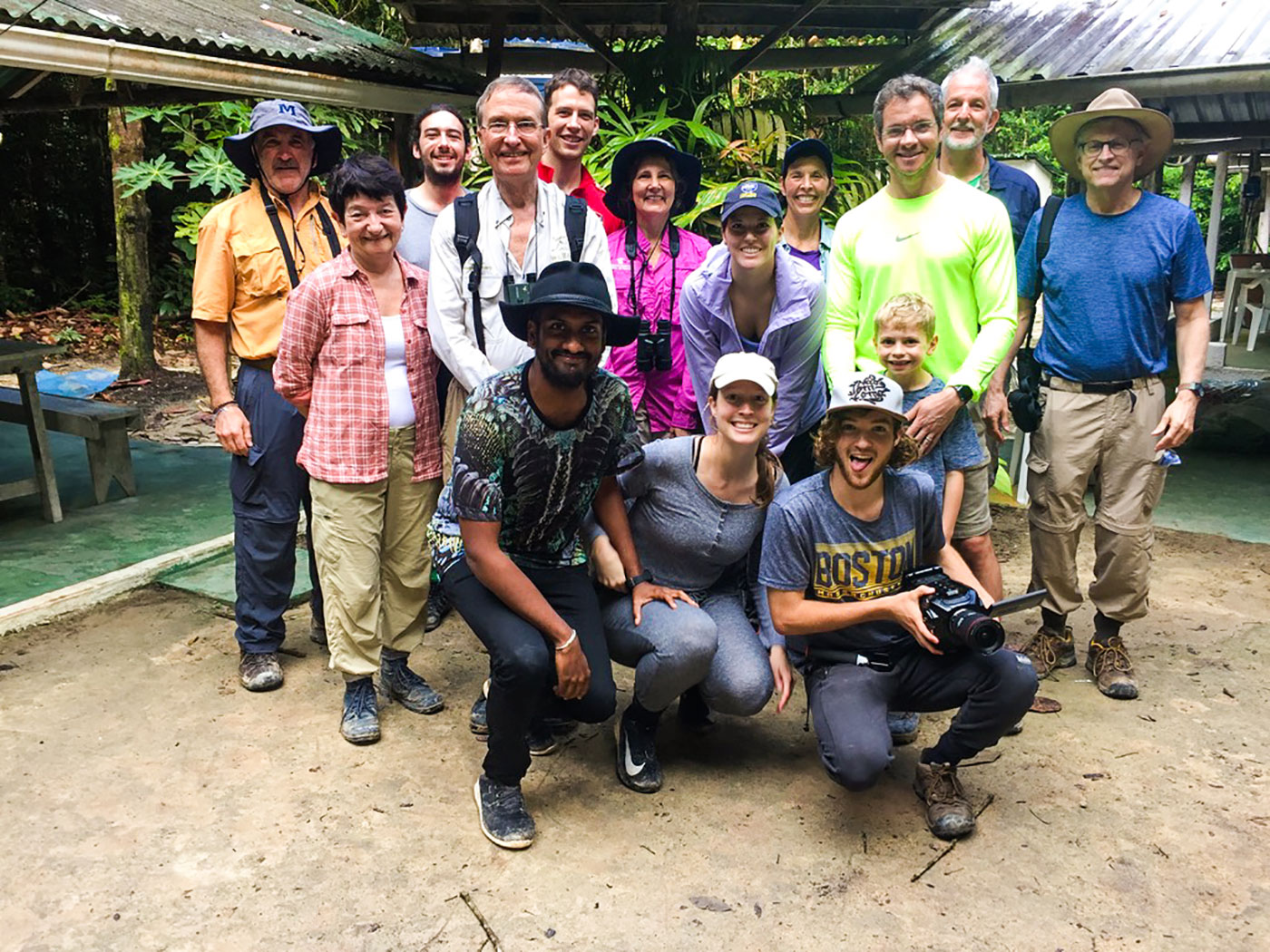 At night, we pick the meat off of Tambaqui fish bones freshly cooked over the fire. Lean back and sip on Brazil’s famous caipirinhas. Happy New Year’s everyone. A toast to this rag-tag group, to the future, and to the Amazon. Then we all scramble back to our hammocks, crawling inside like bullet ants for another night’s rest. Is there a jaguar lurking in the trees close by? Maybe. It sounds as if pebbles are landing on the tin roof over us.It’s starting to rain. Good. The howlers will finally shut up.

You can follow Matt’s adventures elsewhere on the planet and Amazon via his Youtube channel, Into the Unknown.