Ecuador’s Yasuni National Park is one of the most biodiverse places on Earth. One hectare in Yasuni contains more tree species than are native to all of North America.

The park contains countless bird species, frogs, eagles, monkeys, ocelots, and of course, jaguars. In fact, the area likely has the highest density of jaguars in the Amazon, and on Earth.

Unfortunately, Ecuador has approved oil drilling in the park, after a conservation plan that would have kept that portion of the Amazon drill-free was abandoned due to lack of support from other nations.

Oil drilling can have devastating consequences for the environment, as drilling activity results in deforestation, loss of biodiversity, soil and aquatic pollution, and air pollution. In addition, indigenous people are often displaced due to extensive oil drilling in their territory, their lifestyle interrupted by environmental problems caused by oil companies.

To get a sense of what is at stake in Yasuni National Park if plans to drill continue, Diego Mosquera of the Tiputini Biodiverity Station observed jaguar populations over a seven year period between 2005 and 2012, concluding that the area is extremely rare in terms of jaguar densities. 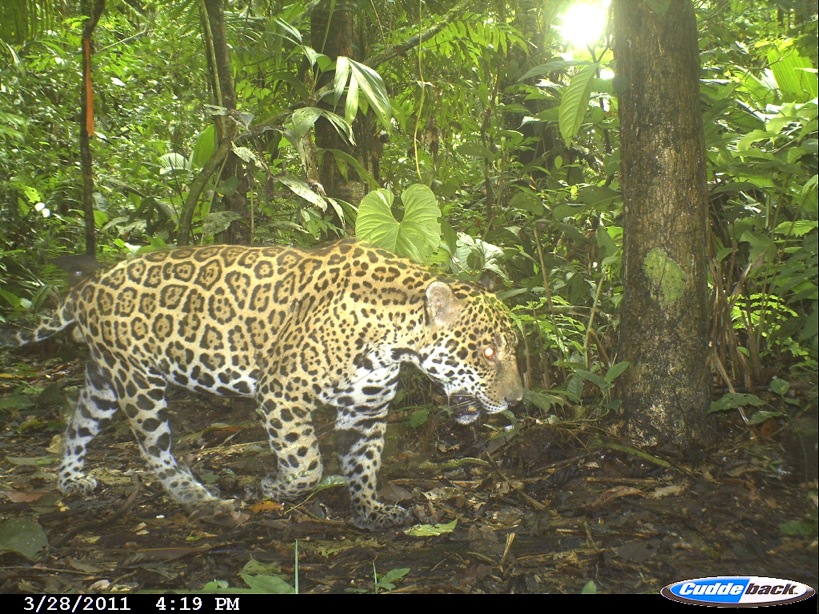 Mosquera’s study used camera-traps to track jaguar activity at Tiputini Biodiversity Station in Ecuador in order to see how important conservation efforts are in the area, and if continued protection is needed in the future to maintain populations of species such as jaguars (the answer is YES).

“Although our study does not provide an estimate of actual density for jaguars in the area, it does demonstrate that jaguars are reasonably abundant and regularly use the area,” wrote Mosquera. “Repeated occurrences of the same individuals within the boundaries of [the surveyed area] also indicate that home ranges of jaguar overlap both spatially and temporally.”

It is possible that because Yasuni National Park is so biodiverse, prey populations are high and a large number of jaguars can live in one area because they do not have to compete for prey. In this way, jaguar densities may be a way to determine the health of rainforests in Ecuador.

As oil drilling is introduced to the park and the area is developed, the jaguars’ habitat will change. It is yet to be seen what sorts of effects human activity will have on biodiversity in the park, but the outlook is grim. “The problem is not necessarily the oil itself, but the indirect effects on the local populations and the development it brings, especially roads,” said Mosquera.

This past week, hundreds of people gathered in Quinto to protest the decision to allow oil drilling in Yasuni.