Deforestation in Brazil Up 28 Percent 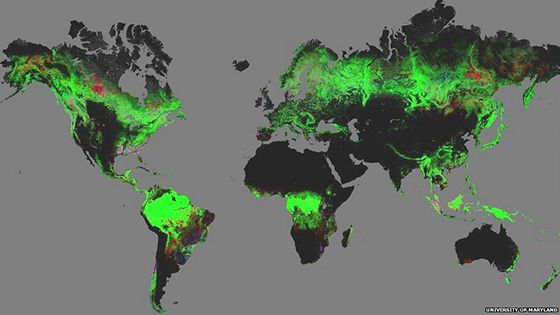 A new interactive online map of global forest loss and gain has been launched by the University of Maryland with the help of Google Earth, allowing viewers to zoom in on forests to a high level of local detail.  Using satellite imagery collected from 2000 to 2012, researches used the map to determine that over a 12 year period, the Earth lost 2.3 million square kilometers of forest (a net loss of 1.5 million sq km) due to logging and a number of environmental factors.

The map also revealed that between 2003 and 2011, Brazil showed the best improvements of any country in terms of decreasing deforestation, as the country cut its rates in half.  Unfortunately, the Brazilian government has recently stated that in the past year the country’s deforestation rate has increased by 28%.  Although the reason for this abrupt increase in deforestation continues to be debated, Environment Minister Izabella Teixeira called the increase a “crime,” and she plans to set up a meeting with government officials representing the most affected areas in order to discuss strategies to reverse the trend.

You can help protect healthy forests by adopting an acre through Acre+Care.