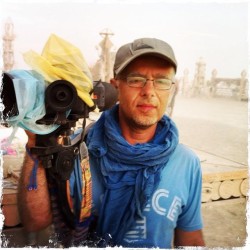 Hervé Cohen is an award-winning French American documentary filmmaker and cinematographer. His work has taken him to various parts of the world from the Casamance in Senegal where he filmed the initiation ceremony of the young Diolas (award winning “Sikambano, the sons of the Sacred Woods”) to the countryside of Sichuan, China, to follow the work of three traveling projectionists (“Electric Shadows” – 1st prize at several international festivals). In 2008 he co-directed and shot “Closer to the Dream” for French tv, a family road movie during the Democratic Primaries in the US.

Hervé has been working as a DP with Harvard professors Robb Moss and Peter Galison on an ongoing project about nuclear waste in the United States “Nuclear Underground”. He was also a DP on a documentary by Russell Long “A Room to Breathe” about the experiment of mindfulness meditation in 2 “rough” middle school classrooms in San Francisco. He recently shot and edited the documentary “Broken Stones” by Guetty Felin, a film about self-recovery after the Haiti quake, which takes place around the ruins of the cathedral of Port-au-Prince.

Hervé traveled for the first time in the Peruvian Amazon in the summer of 2010, and did the cinematography for the documentary “River of Gold” produced by Amazon Aid Foundation. His current project is called “The Music of Time”, a documentary that he directed, shot and is currently editing after his second trip in the Amazon in November 2011; a poetic musical journey from the Andes to the Peruvian Amazon rainforest, to discover the greatest biodiversity in the world but also the fragility of the ecosystem – with the collaboration of musicians Wayne Shorter, Esperanza Spalding, Leo Genovese, Leni Stern.