The 3 Types of Rivers in the Rainforest 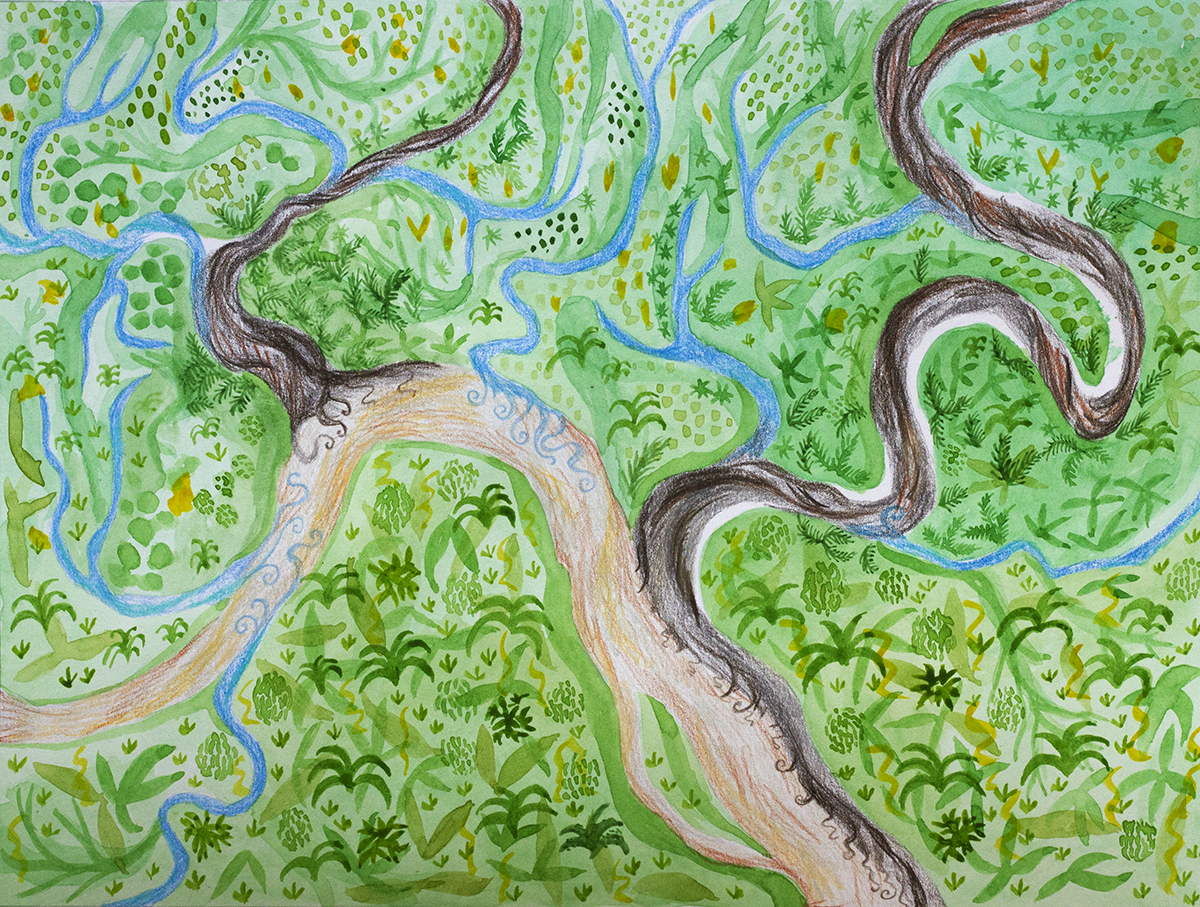 In the rainforest, the color of the water in a river holds the story of the river’s origin. A river that passes through hard, rocky areas looks very different than one that passes through soft soil. The kinds of plants that grow along its course, the minerals that are present in its channel, and the kind of human activity that happen all impact the way a river looks. Based on my own understanding of rivers I’ve seen, this makes intuitive sense. I’ve seen clear water running swiftly across rocky channels in the mountains, and murky water flowing between soft, grassy hills. I’ve noticed the difference between the river in the woods, meandering between trees and rocks, and the clouded, brown river that replaces it when the trees are cut down and construction starts on adjacent land.

While the Amazon River is the longest, most well-known river in the Amazon Rainforest, its existence is only possible because of the thousands of tributaries that channel water into it. These tributaries come from the almost 2.3 million square miles that make up the Amazon River Basin. That’s more than twice the size of the Mississippi River Basin [1]. In that huge area, there are many different types of landscapes that the rivers pass through on their way to the Amazon.

The rainwater and glacier water that doesn’t sink into the ground flows over the surface of the earth to form rivers- picking up loose sediment and organic material in its path. As rivers become bigger, they collect more and more sediment– clues about where the river came from and the types of landscapes that it passed through [2]. 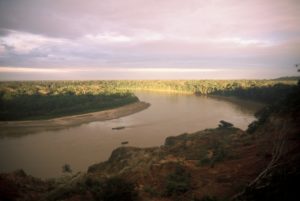 The Amazon River is known as a “whitewater” or brown-water river. This is different from the whitewater rivers that you might be familiar with- the kind of river that’s good for kayaking. Whitewater tropical rivers aren’t even white at all. They tend to be a light brown color, from picking up large amounts of sediment [3]. In fact, the types of sediment tell not only the story of the river, but of the history of the land that the river passes through. One of the Amazon’s tributaries, the Madeira River, is a whitewater tropical river that passes through regions of sedimentary rocks that formed in the Mesozoic and Paleozoic eras, and igneous rocks, formed long ago through volcanic eruptions [4]. When this tributary joins the Amazon, it brings with it bits of all these rocks, as well as organic matter from plants and soil from the riverbanks. Most of the biggest rivers in tropical rainforests are whitewater rivers that flow through the lowlands.

Blackwater rivers, which are common among the smaller tributaries in the Amazon Basin, have a deep brown, almost black color. However, they are extremely clear and often it is possible to see all the way down to the bottom of the river. The color comes from tiny bits of decomposing plant material that falls in or is picked up by the river as it passes through areas of soft soil and fallen leaves [3]. This plant material is full of toxic compounds that the plants use to protect themselves from predators, so these rivers are home to fewer insects and microorganisms than other rivers [5]. One example of a blackwater river is the Rio Negro, which is one of the Amazon’s largest tributaries. When it joins the whitewater Solimones River, the blackwater and whitewater don’t mix right away, but flow next to each other so that one side of the river appears dark, and the other light. Like whitewater rivers, blackwater rivers are most common in the lowlands of the Amazon Basin. 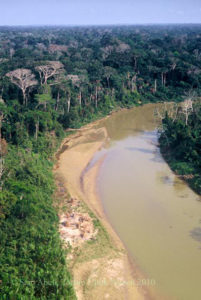 Clearwater (or bluewater) rivers are found most often in the highlands of the Amazon Basin. These run swiftly through mountains and cloud forests, over ancient rocks [3]. They don’t contain as much sediment because the land that they move across is made up of older rocks that are less easily eroded, compared to whitewater and blackwater rivers. These high mountain streams eventually join whitewater and blackwater rivers as they descend into the lowlands of the Amazon Basin. 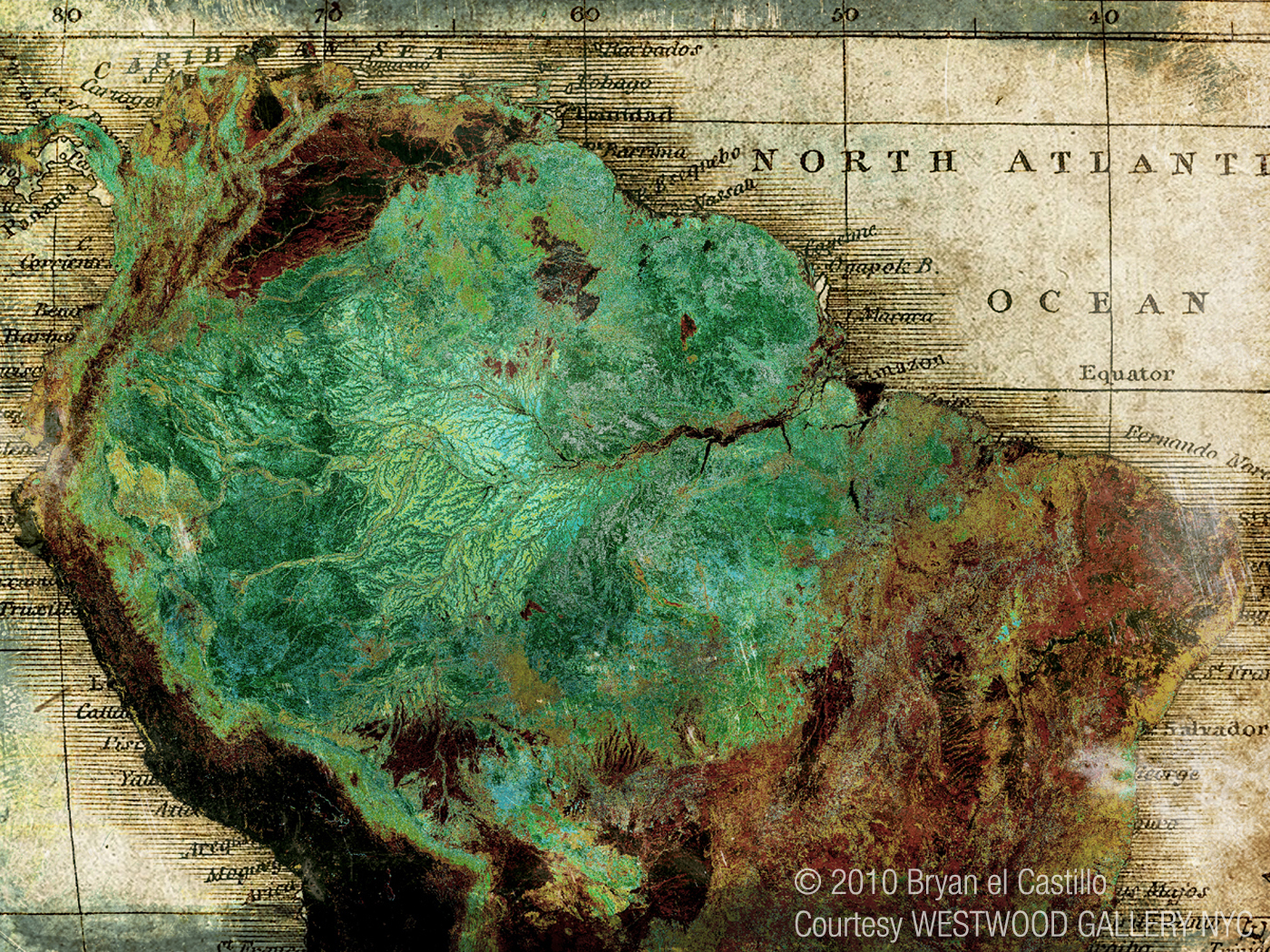 Clearly, rivers can be very different based on where they are and the kind of land they flow through. They’re also very sensitive to pollution and other harmful activities around them. Mining, deforestation, and industrial farming are a few examples of ways that rivers become polluted and damaged every day. Each type of river is in a finely tuned balance with the plants, animals, and landscape around it and these activities easily upset this balance.

Are you curious about the ways that you could help preserve these amazing rainforest ecosystems? Amazon Aid Foundation has a few ways you can help:

Protect an acre of rainforest from deforestation through the Acre Care program.

Plant a tree in the Amazon as a way to help reforest areas that have been lost.

Find out about actions you can take to reduce your own carbon footprint.